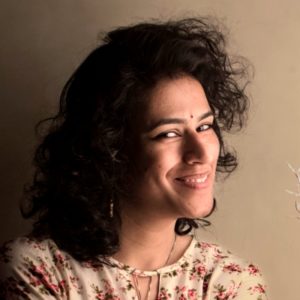 Shruti has been a writer for the web, for the last three and a half years. She’s written a few episodes for the Indian adaptation of ‘The Office’, along with some other shows for various web platforms. Before that, she was the head writer of the first ever female-centric comedy channel in India, called Girliyapa, where she wrote humorous and satirical sketches that went viral, dispelling the myth that women can’t be funny.

Before Girliyapa, she was a copywriter in an advertising agency, where she wrote ads that never got approved for being ‘too edgy’, and got paid generously for the same, the currency being peanuts.

Shruti graduated from Delhi University and worked in the finance sector before trying her hand at any form of writing.

Her parents have always been encouraging and supportive through this roller coaster ride, by saying phrases like, ‘wo sab to thikhai par shaadikabkarogi’.