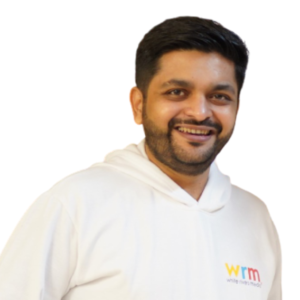 Having expertise in the digital marketing space, Shrenik in his free time likes to mentor start-ups and entrepreneurs. He is quite passionate about helping and guiding new businesses throughout the setup and the initial journey. Shrenik is an avid reader and likes to be updated on the latest in the media and entertainment industry. When he is not busy mentoring start-ups, Shrenik enjoys going on road trips or watching stand-upcomedy.

Shrenik is a regular speaker at various digital and entrepreneurship summits, including TedX. He has also been featured in the 30 Under 30 list by IMPACT, along with several accolades nationally & internationally in the field of advertising and marketing. Together with Mitesh,they have driven White Rivers Media to be one of India’s only agencies to be featured in Deloitte Tech Fast 50’s Ranking 5 years in a row, in India & APAC.

In less than 9 years, the young founders have built White Rivers Media as one of the fastest-growing Indian independent digital marketing agencies with a focus on Content, Media & Technology. Together they helm a team of 250+ passionate digital marketers, across their offices in Mumbai and Delhi. Under their guidance and leadership, WRM has worked with top brands across the country like Dream11, SonyLiv, Twelfth Man, Red Chillies Entertainment,Dharma, T-Series, Balaji Films, ALTBalaji, Zee, Viacom, Sony,ABM, Gatsby, Dun & Bradstreet, Times Network, and manymore.

Over the past year itself, the agency has marketed more than 50+ Bollywood and Hollywood movies, launched over 150 web series on leading OTT platforms and entertainment channels,and won 150+ awards at various industry awards in India and globally.Connect with him: https://www.linkedin.com/in/gandhishrenik/