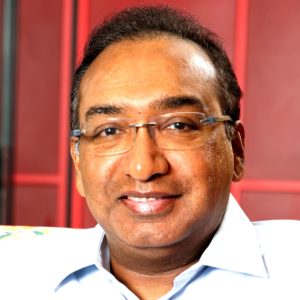 Among varied highlights in his career span was the network revamp at Star TV and the launch of Amitabh Bachchan & KBC, and the Balaji soap operas on Star Plus. These catapulted the channel to the Number 1 slot in the year 2000, making it the undisputed leader for a span of 9 years. The revamp of Channel V and launch of Star Gold, Star Vijay, Star One & Star Utsav also happened under his watch.

After a stint with Yellow Pages in Mumbai (2 years) and Advertising & Film making with Goldwire in Chennai (4 years), Sameer entered the nascent television industry in the early 90s with Star TV taking charge of Star Movies, the only English movie channel in India. Over a 12 year career at Star, he went on to handle a variety of portfolios, including Movie Acquisitions, Head – On Air Promotions, Programming Head – Star Plus, Executive Vice President, Network – Programming, Chief Operating Officer (overseeing Content, Communication, Advertising Sales and Distribution) in 2002, and finally Chief Executive Officer in 2006.

In 2007, Sameer turned entrepreneurial with NDTV Imagine Ltd. The venture had a strategic partner in NBC Universal at 26%. Imagine broke new ground by introducing mythology and historical programming into daily primetime schedules, an industry first and commonplace today. While the channel Imagine did not quite succeed, the lessons from steering a ship through the turbulent times of recession, intense competition and failure were sobering and invaluable.

In 2010, he successfully concluded the sale of NDTV Imagine to the Turner Group, to become the CEO of Turner General Entertainment Networks – TGEN (a Time Warner Company).

He sold his stake in TGEN in 2012 and donned an entrepreneurial hat exploring opportunities in Online Video, E-Commerce, Film & Television Production and Hospitality. An advisory role with Balaji Telefilms resulted in him joining the company.

From 2014-2017, Sameer overlooked the strategy, operations and expansion at Balaji Telefilms Ltd. as its Group CEO, driving growth in Television Production, streamlining the Movie Studio,fund raising and successfully launching the OTT-SVOD platform of premium, exclusive and original content ALT Balaji.

In the past, Sameer has been the Chairman of PROMAX India from 2005-2011 and holds the distinction of being the sole representative from India to be invited on the board of PROMAX Worldwide.

Born and raised in Mumbai, he holds a BA in Economics and a Diploma in Hotel Management.