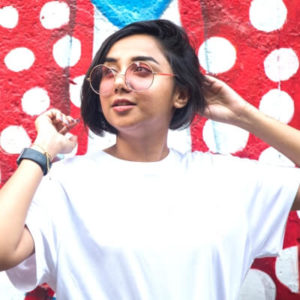 Prajakta has been appointed as the Indian ambassador for YouTube’s Global Initiative Creators for Change, along with 50 other inspiring creators from over 16 countries. The initiative addresses hate speech, xenophobia and extremism. She was recently announced as the Viral Queen of 2017, at the IWM Digital awards last month. Moreover, she has been signed up as the face of H&M India’s online store.

Her biggest trait is how she triumphantly connects with her audience on a personal level, as evidenced by the spectacular response she receives during various on-ground events like the YouTube FanFest India and Comic-Con India, where she is frequently invited as a special guest.

Invited by the Obama Foundation, to attend the town hall meeting by President Obama in India last December, Prajakta has used her channel to raise awareness for several social campaigns. Prajakta has also been part of initiatives like One.org’s #GirlsCount Campaign, and YouTube and Instagram’s Safer Internet Day Program.

Her initiative on body shaming, called #iPledgeToBeMe, saw women reach out to her from all over the world and she received a whopping 10,000+ emails in just the first week of the release. To highlight this issue further, she even shot a video called Shameless, an extension of the initiative, bringing several well-known Indian artists such as Gaurav Gera, Raftaar, RJ Malishka, SahilKhattar, MithilaPatkar and many others together.

She has also collaborated with fellow YouTubers like Collins Key and Bhuvan Bam. Recently, Prajakta hosted the blue carpet for Twitter India and Amazon Prime Video’s Comicstaan, with Abish Mathew, SapanVerma, Sumukhi Suresh and Naveen Richards on the panel.