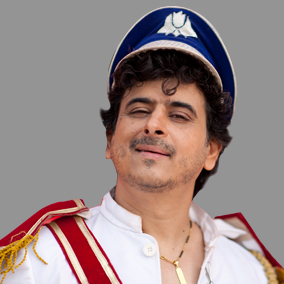 Palash Sen is the founder and front man of India’s best known band, Euphoria. Palash was born on the 23rd of September 1965, in a family of talented doctors and singers. He attended St. Columba’s school and taking the family profession ahead, pursued medicine from University College of Medical Sciences, Delhi. It was during this time that he started Euphoria with his friends. Euphoria, which began as a college band, went on to become one of the most successful and best-selling bands to have emerged from the Indian subcontinent. Euphoria has 6 studio albums to their credit along with a “Best of” compilation. Palash is hailed as the father of Hindi Rock in India and Euphoria still continues to be one of the subcontinent’s biggest and busiest live acts. Palash made his debut as an actor in 2002 with Filhaal, a movie directed by Meghna Gulzar. He starred in the 2015 Bollywood film, Aisa Yeh Jahaan, and Euphoria composed the music for the film. In addition to singing, Palash has directed and produced all music videos featuring Euphoria, post 2012. He made his debut as a filmmaker with the short film, Jiya Jaye, in 2017 and followed it up with another short film, Iktarfa, in 2018. Palash is set to release his 8th album with Euphoria later this year.