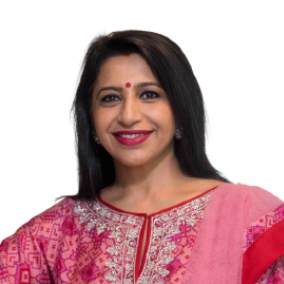 Megha Tata joined Discovery Communications India as Managing Director of South Asia on 1st April 2019. Megha has held leadership roles at organisations such as BTVI, HBO, Turner International and Star TV, in an illustrious career spanning more than 28 years. An industry veteran, she leads multiple national as well as international industry forums and an esteemed member of the National Media and Entertainment Committee of FICCI, and is also the second woman to ever become the President of the India Chapter of the International Advertising Association.

Megha has been instrumental in launching several marquee projects for the network in India, including the local launch of streaming service discovery+, now India’s largest aggregated real-life infotainment OTT service. Under her leadership, Discovery has forayed into original Indian content, with discovery+ launching a slew of exciting originals, including the critically acclaimed ‘Into the Wild with Bear Grylls’ episodes with Rajnikanth and Akshay Kumar. Her knowledge and deep-rooted understanding of the business have aided the network to achieve new heights in the animation genre with Discovery Kids smart strategy and marquee content line-up for the Indian audience. Rebranding Discovery’s sports channel – Eurosport in March 2020 is a journey that’s worth a lot of learnings.

In 2020, Discovery India retained its position as the ‘Most Trusted Real-Life Entertainment Brand’ by TRA Research Private Limited for the 10th year in a row, with content teams being singled out for innumerable accolades including; ‘Network of the Year’ as well as ‘Best Entertainment Programme’ and ‘Best Infotainment Programme’ for Man vs Wild with Bear Grylls and Prime Minister Modi at the 25th Asian Television Awards.

Megha has been bestowed with multiple industry accolades during her career. She is recognized amongst the top 50 influential women in media, marketing and advertising and was also conferred ‘Women of the decade in media’ by the Women Economic Forum in 2018.

In addition to being actively involved in industry initiatives, Megha is energized by engaging with young minds through guest lectures at leading educational institutes including IIT, IIM, ISB, UBS, and is passionately involved as a Volunteer with Isha Foundation – a non-profit organization started by Sadhguru.