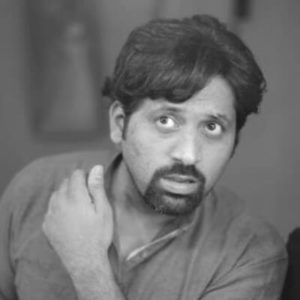 Kartik Krishnan is an ex-software engineer who got fed up of working in an MNC, and decided to plunge into the mad, yetcreative, world of Ad films, Features, TV, Shorts, Web Series andSketches, as a Writer, Actor, Assistant Director, Content Creator,Creative Producer. He has acted in films (TheGirl in YellowBoots, Bombay Talkies by Dibakar Banerjee, Dheepan byJacques Audiard, Solo by BejoyNambiar), and is also thedialogue writer of Phantom Films’ upcoming horror NetflixOriginal series, Ghoul. He was also one of the early foundingmembers of the cinema blog, PassionForCinema.com.

For the past few years, he’s been involved with Pocket Aces,writing and acting in some of FilterCopy’s most viral videos likeConfusing Things Girlfriends Say, Stuff Women Are Tired OfHearing, Things Brothers & Sisters Do, If Parents Behaved LikeUs, Every Patient Ever, and many more. Several of these videoshave bagged trophies at TalentRack Awards, Indian ContentMarketing Awards, etc.

Kartik was also a mentor for the finalists of FilterCopy’ssuccessful partnership with India Film Project, titled, Web Writers’ Lab.

Currently, he serves as the Creative Director of Dice Media, Pocket Aces’ long form contentchannel, where he has helped produce many of India’s most popular web series such as LittleThings, What The Folks! andAdulting.

In his free time, he loves to sing and is learning Hindustani classical music. He also has anundying love for curd.