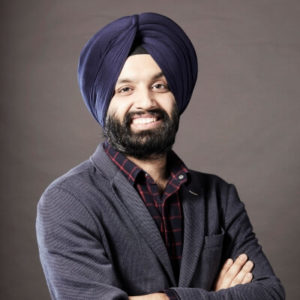 COO and Co-Founder
One Digital Entertainment

With a keen eye for identifying creative talent, Gurpreet Singh comes with a cumulative experience of more than one and a half decades in the digital entertainment space. At 33, he spearheads one of India’s largest and leading digital video and content networks, One Digital Entertainment, specializing in content across Entertainment, Music, Food, Comedy, Fashion and Lifestyle.

Very early in life, Gurpreet discovered that his success depends on his ability to create and ‘make things happen’. In 2002, at the ripe age of just 17, he launched a flagship mobile services company, called Funtooz, which allowed web users to send text messages from their computers to mobile phones, and download black and white picture messages, as well as share monophonic ringtones. It earned him the coup of being the youngest entrepreneur hailing from Punjab.

With a motto of turning ambition into action, Gurpreet co-founded One Digital Entertainment in 2013, which currently has an unbeaten repertoire of managing a whopping 3000+ individual creators and 3 billion watched minutes of content every month. Stars like Badshah, Raftaar and digital sensation, Prajakta Koli, aka Mostly Sane, amongst several others, fondly credit him for contributing to the success of their career trajectory. Widely known for his knack of creating superstars, he believes in getting his artists the attention and respect they deserve in today’s digital arena.

Only recently, his network’s web original, ‘SOS – Survivors of Suicide’, was awarded the Best Web Series on a Social Cause, by the IWM Digital awards. The series has received rave reviews from the audiences and has earned all-round appreciation in the digital circuit as well.

During his 16 years of experience, Gurpreet has successfully moved up the ranks, from heading the content production at Hungama and UTV, to fore-fronting the entire mobile business and online content syndication.