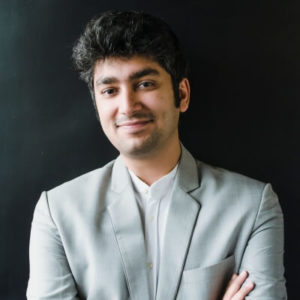 He then took a break from advertising and travelled the length and breadth of India for the next fewmonths, figuring out his next venture, having turned down several lucrative offers from advertisingagencies, local and overseas, and even a stint at Google India.

Four years on, he is now the Co-founder & Chief Creative Officer at Terribly Tiny Tales – the most lovedstorytelling platform, with 75,000+ writers from around the world, and a weekly organic reach of 12 million.

He also looks after Terribly Tiny Talkies, which has creatively produced some of the best short films tocome out of India in the last two years. Among many accolades gathered, five of the films were nominatedat the 62nd Jio Filmfare Awards 2017, and one film was awarded with the Best Short Film at MumbaiInternational Film Festival, 2016.

He has also been on the first ever short film panel at NFDC’s Knowledge Series at Film Bazaar in 2016; and debuted with a memorable session at the Jaipur Literature Festival 2017.

In his free time, he hunts for the brightest young minds to collaborate with, and has been invitedto speak at various media colleges.

He enjoys travelling alone, and has even given a TEDx talk on the same.