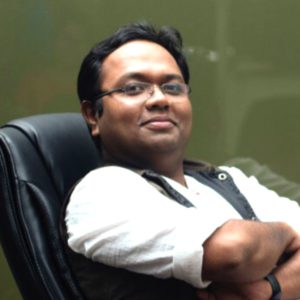 BiswapatiSarkar is the Creative Director at The Viral Fever (TVF).

After completing a 5 year course from IIT Kharagpur, Biswapati, the master of numbers, joined TVF in 2012, an association that began even before he formally joined the organization. The first script Biswapati wrote for TVF was ‘Rowdies’,and that went viral. TVF started doing sketches in 2014 and shows in 2015, with Biswapatias the writer for their much-popular web series Pitchers and Permanent roommates. ‘Barely Speaking with Arnub’– a show that stars Biswapati as the host, has witnessed popular Bollywood celebrities and personalities as guests.

Hailing from a family of ardent readers, Biswapatihas been a part of TVF since its inception, initially as a script writer, and eventually as a crucial part of the organization.He completed his schooling from Rourkela.