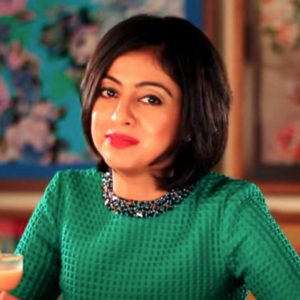 Atika has been a TVmediaperson for over 15 years. She had launched 6 channels in 15 years which are India’s prestigious news channels like Star News, IBN7, E24/News24,Bhaskar News, News Nation, and now Colors’ movie channel – Rishtey Cineplex. She produces and hosts a very popular celebrity chat show, which is distinguished by its literary content and enriching conversations.

She has been a leading anchor and the face of all the above channels, and having launched, anchored and produced many path-breaking daily and weekly shows like SaasBahuaurSaazish in 2005 till date, she has held multiple profiles in her career.

A popular poet, whose Urdu and English Nazms and poetry are viral on social media too, Atika was a prolific theatre actor in college, before starting her career with Star, in early 2003.

Having worked with stalwarts of media, like VirSanghvi, Uday Shankar, RaghavBahl, RajdeepSardesai to, now, Mr Raj Nayak of Colors, she continues to set new benchmarks in TV content, which, in her words, caters to both, the privileged as well as the not so privileged. Having worked closely with the News, Film and TV industry in Mumbai and Delhi, Atika is counted among the few very resourceful people in media.

Hailing from Lucknow, she thinks language and culture is the new soft power.