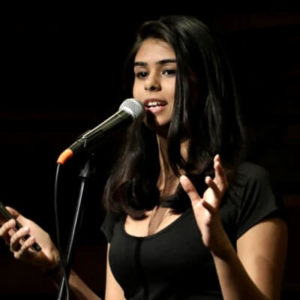 Aranya is a nineteen year old poet, who has added the nuance of maturethoughts to youthful curiosity, in the Indian poetry circuit. Her pieces targetsocial issues, especially stigmatized topics.
• Aranya’s first released piece, ‘A Brown Girl’s Guide to Gender’, hit1 million views, within two days of its upload, currently over 30million and counting. Aranya’s second video, ‘To Bleed WithoutViolence’, was a collaborative piece with WASH United, which hit 7million views over the weekend of the upload. She nowcumulatively holds around 45 million views.

• Aranya has also been featured in the FOX documentary- ‘Girlz’.

• She was the first poet to integrate spoken word in Bollywood, through her collaboration with Akshay Kumar, for the movie‘Padman’. Aranya’s work has been recognized by Reebok andpromoted at their event ‘Fit to Fight’ in the month of December of2017.

• Aranya has been featured on Rolling Stone and Harper Bazaar Top2017 list.

• Aranya is the co-founder of More than Mics, an organization set tocurate creative platforms for performance arts (poetry, music, comedyetc.), which has been featured in publications such as Hindustan Times,Midday, Asian Age, What’s Hot, Little Black Book, etc.